Hello, and welcome to the June 2022 Progress Report.

Before we get started, if you haven't already, we recommend reading this Development Blog post that we put out in early June:

Now, let's move on to the June Progress Report!

As you can see, FINALLY, Act 3 is actually 100% done now with the completion of ALL Act 3 Sidequests!

As for Act 4, the meters here haven't actually changed since last month.

Pretty much the only thing left there is the encounter with the Act 4 Boss and a tiny tidbit of that last Act 4 Sidequest. Both of these things are basically much complete and just require sound related things to be finished so it won't be long before Act 4 is 100% complete as well.

If Act 3 is done, and Act 4 is basically done, what happens now? 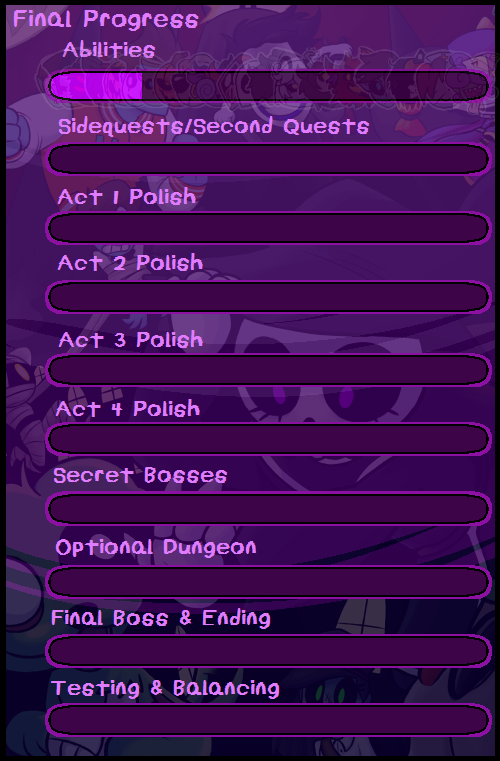 The final progress bar, in all it's beautiful glory.

What does this mean, exactly?

It means that when all those bars are full, the game is done. Gold. Sweet Death.

However, don't get too excited. We're not out of the woods yet.

Let's go over what these bars actually entail...

As you no doubt know, there's over 30 Party Members in this game. Each have AT MINIMUM 8 moves including their Ultimates. Some have even more than that such as Alice who has a whopping 13.

When we were developing the game up until now, we simply gave characters "the bare minimum" of abilities. Essentially, what they'd start with and then pushed any unlockable abilities off to the side for later.

This means that every character who doesn't start with 7 moves will need the rest of their repertoire filled out.

As you can see, we've already started into this immediately, knocking out Alice, Bolt, Webs, Beatrice, Wraps, Jekyll, Jackie, and Mask Guy!

There's still a long ways to go though, but if you'd like to join us on that journey give us a follow at https://www.twitch.tv/horrorvale where we've actually been streaming the work for these!

So, obviously there's a lot of Side Quests in this game. Not just for recruiting Party Members, but for other smaller rewards too. We've avoided these quests until now, only doing Sidequests that require Party Members. Not only that, but there's also the issue of Second Quests, which are essentially sequel quests for Party Members that go even deeper into their stories and as a result, completing these will net you that characters Ultimate Ability, which is basically what it sounds like. It's an Ultimate Ability.

This one might confuse some of you, you might be thinking "but wait, aren't these Acts DONE?"

And well, yes and no.

As we develop the game, and as the testers do their thing, we get feedback or notice certain things that could be removed, changed, or added to make the overall experience better. One of these such things is the Forgotten Mansion being moved entirely out of Act 1 and into Act 2. Now there needs to be a new dungeon in Act 1 to replace it. There's also little things like NPCs we want to add or adjustments to certain segments. Basically everything that we've noticed about these Acts on our journey to get to this point, wrote down on a clipboard somewhere, and shoved it away for Future Us to deal with. The future is now!

I really feel like I don't need to go too deep into this. Players who want to see everything this game has to offer will see these for themselves when they play it.

Without going really far in detail, there's a planned Optional Dungeon in the game meant to test your skills and all you've learned in the game. It's hard, and you can only access it by recruiting every single Party Member in the game. It's been in the plans since the beginning, and we want to make sure it becomes a reality.

And finally, the game will need to be fully tested and all Party Members, Enemies, Bosses, and Skills balanced properly.

Up until now Testers and the rest of our team have only been playing an unfinished game. Many times only bits and pieces using skips and other dev tools.

So, the game needs to be tested as a complete experience, played the way a regular player would.

This will be a difficult task and could take months on its own just to get it right, but it'll be worth it!

As said before, once all this is done, then the game is basically... Done!

But we have to get there first. This is the start of the Final stage of Development.

We can't wait to go on one last Development journey with you here before the game is out and in your hands.